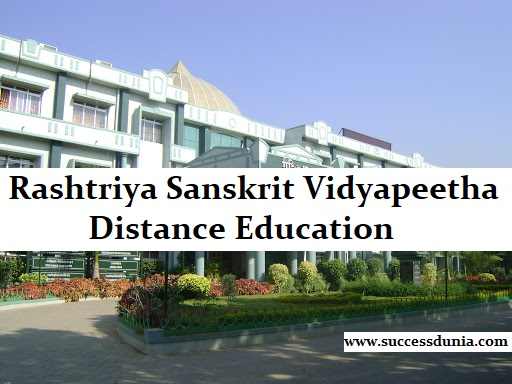 Rashtriya Sanskrit Vidyapeetha Distance Education Invites the Applications For Admission in Its Various Sanskrit Courses through Distance Mode For the 2020 Batch. The Admission Process of Rashtriya Sanskrit Vidyapeetha Distance Education is Open Only For Eligible Students in Its Diploma in Sanskrit, Certificate in Sanskrit, P.G. Diploma in Yoga Vijnan, Prak-Sastri, Sammanita Sastri, B.A. (Sanskrit) and Acharya Courses. The Eligible Candidates Can Apply Here For the Admission Process, For this they Have to Follow the Given Below Steps.

Note: other than the course feesKindly Mention Your Name and address on the backside of the Demand Draft (DD) and Course Name In Which You Want to Get Admission. Apart From this The Students Have to Pay Rs. 500 as a Admission Fees.

Directorate of Distance Education of Rashtriya Sanskrit Vidyapeetha Offers the Various Distance Learning Couses through DDE and Open Mode. All Sanskrit Courses of this University is Given Below With Eligibility.
I Hope You Liked this Article. For More Information, Go to the Official Website of the University, There You Will Get More Information From the Information Available Here.